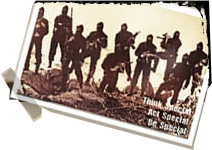 Back to Press Clips > The Statesman

Gambhir Nallah, in Rajouri, Jammu and Kashmir, and Habbaniyah, near Baghdad, are worlds apart. But tragedies can be very similar – as is this story about two soldiers with the same names and virtually identical back grounds.

Uday Singh, 21, a US army specialist of Indian origin, died when his convoy was ambushed on 1 December. After dark on 29 November, less than 48 hours earlier, Udai Singh, an Indian Army major from Noida, an officer decorated earlier for gallantry, died fighting militants. Both young men in the line of fire were sons of Indian Army officers and grandsons of men in uniform. Both died fighting a difficult enemy – the well-armed guerrilla.

Major Udai Singh, a paratrooper officer like his father, was attached to the Vikas Regiment, high-altitude specialists of Tibetan origin in the Indian Army and the six-and-a-half years he spent in the Army was mostly in the frontlines. He had taken part in operations in the North-east from September 1997 to February 1999 and months later, fought in the Kargil War. Then, it was back to fighting militants in J&K, first in Kupwara from April to November 2000 and then, in Poonch-Rajouri betWeen April. and August 2001.

He could have sat back and said: “1 have done my duty,” but instead, he joined 4 Vikas in November 2001, a commando battalion that had fought in Kaksar during the Kargil War. Counter-insurgency is as different from war as you can imagine. There is no end in sight, unlike a war, that is usually short and sharp. The enemy is harder to find. There are probably fewer rewards and a lot more stress.

Major Singh got his Sena Medal, a gallantry award last year for his role in fighting militants in Thanamandi, J&K. In Gambhir Nallah, in Thanamandi, in a similar firefight, the major was shot dead. As team commander, he was in front, looking for militants that night. They were there – and they were effective as well. The scout, who leads, was hit and the Major raced, ahead to pull him out. He was hit in the chest and neck, but fought to the end. As a friend and fellow paratrooper said, he wasn’t just soldier, but a brilliant photographer.

The other Uday was also awarded a medal – the US Army Achievement Medal for meritorious service. His father had served in the Indian Army’s armoured corps, before retiring in 1995. His grandfather had retired from the Royal Indian Air Force.

Army specialist Singh died when on a patrol in Habbaniyah. A tankman like his father, he was in Humvee all-purpose vehicle when it was ambushed. A gunner, and – therefore, more vulnerable than his mates, he died on the way to hospital.

By Srinjoy Chowdhury / The Statesman on December 6, 2003.